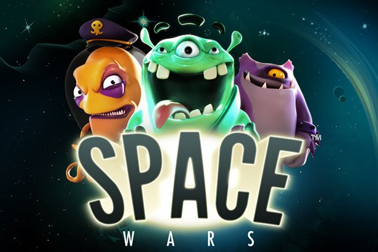 Powered by industry giants NetEnt, Space Wars is a fast-paced 5 reel video slot with 4 rows, a whopping 40 pay lines and a load of stacked symbols. The story revolves around 5 extraterrestrials battling it out to capture an all-powerful red crystal.

Although there is no bonus game, this slot has a unique re-spin feature, which helps to explain why Space Wars is still popular despite being originally released in 2013.

As you would expect from a NetEnt slot on a new online casino, the graphics are amazing and beautifully clear. The reels are set on a blue/purple background giving you the feeling of being in outer space.

This is reinforced by the images of a planet and space debris. Winning combinations trigger some excellent 3D film-quality animations. To the right of the reels is the unique feature of this game – the cloning chamber.

The 5 aliens are surprisingly cute, with each species having its own shape and colour and coming in 2 sizes. Smaller versions are worth less than their larger, armed comrades, and the colours in ascending value order are purple, blue, green, olive and orange.

There is also a WILD symbol and a high-value red crystal. Spin a winning combo, and those winning symbols are sucked into the cloning chamber and duplicated.

Originally released in 2013 this game could only be played via desktop computer, a disappointment to any mobile gamers. However, in February 2018, NetEnt released a revamped HTML5 version.

This means that it is now available for players on the move using both mobiles and tablets. As you would expect from NetEnt, both iOS and Android devices are catered for without any loss to the animations or the crisp graphics.

Whilst there is no bonus free spin game, there is a unique cloning re-spin element. This can lead to jackpot wins of 1000x your original stake.

Cute characters, great graphics and the unique cloning pod re-spins are the big draws for this game. Land a winning line and those symbols fly into the pod and are cloned then hurled back onto the reels for a free re-spin.

Since these symbols are stacked, the chances of landing another winning line are increased. RTP is 96.8%, so we would recommend sci-fi fans give this game a whirl.